The Parish has always been an area of great industry. From the Roman occupation, man has made the greatest use of the environment. In very early times crops were grown and animals were hunted and herded, and in later years large estates were set up which had many farms rented from the manor. These still form the boundaries within the Parish. Because of the nature of the soil and the underlying rock, most of the land was used as pasture, but the Worth open field system and the strip lynchets allowed villagers to be self sufficient. Cattle and sheep (to a lesser extent) were and still are the main industry. However, some arable crops were grown around the village of Worth towards the end of the 20th century; in more recent years many farms have ceased working and their fields sold to other farms or used in the tourist trade. Today there are just five working farms.

Beneath the landform lies stone: Portland stone and freestone on the southern shores and several veins of good Purbeck stone (on top of the Portland beds) which form outcrops further inland. This upper bed is the so-called bed of marble which is itself overlaid with Wealden clay.

The Romans dug the marble in the 1st century but when used outdoors, the quality was variable and some tended to flake. However, today there is plenty of evidence to show the use of Purbeck marble in Roman Britain. The industry lapsed until 1150 when there was a great increase in Church building. Purbeck marble became the stone of choice. Polished, and used indoors it became highly desirable and was used in countless churches and cathedrals throughout England in the form of effigies and columns. As well as Purbeck marble, massive amounts of stone was quarried and transported for building of churches, manor houses and importantly Corfe Castle. In medieval times hundreds worked the thin marble beds. Much of the stone was transported to West Street in Corfe Castle where it was carved, but some went through Ower and Swanage. There is some evidence to show that some of the marble was carved on site, e.g. at Downshay.

Later the industry failed because there was too much water, the bed went too deep and alabaster became the fashion, but Purbeck marble still had an important role. Today, under very strict rules, it can still be quarried if there is an accepted need for its use. 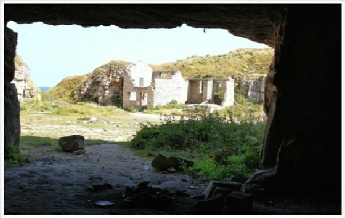 In the 18th century there was a great demand for building stone and paving. There were over 200 quarries in the parishes of Swanage, Langton Matravers and Worth Matravers. Along the south coast the cliffs were solid stone. The best seams were near the top and halfway down the cliff face.

The stone was quarried from the cliff face and later mined with caves or tunnels. The seams were very thick and produced sharp edged building stone for use in building manor houses and public buildings. Blocks of up to 50 tons were taken from the cliffs and cut into manageable sizes. Most of the stone was transported by sea to Swanage. In the 18th and 19th centuries there were scores of quarries extracting Portland and Freestone from Seacombe and Winspit. At Eastington and Gallows Gore the best seams were worked to produce paving stones.

The quarries at Seacombe ceased production between the two world wars but the Winspit quarry continued to work until the late 1950s. During the Second World War there was a large demand for hardcore for road building and airfield runways. After the war stone was extracted for paving, house building and walls. 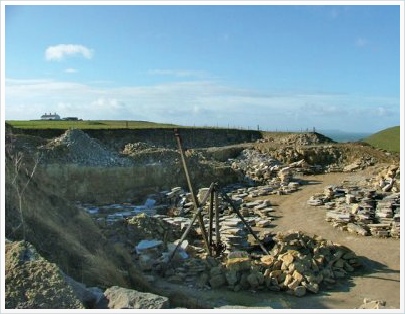 19th century and beyond

In the late 19th century a quarry was opened at Swanworth to produce cobblestones. After the 1914-18 war it changed its production to lime for water treatment and agricultural use. Lime kilns and a crusher were introduced. Later still thousands and thousands of tons of stone was produced for road building and land reclamation.

It was easy to transport the stone in all its forms along the new road system by lorry. This left a large canyon in the landscape to the west of the Parish. In 1920 the Rempstone estate sold off pieces of its land. Outcrops of stone to the north of the ridge were purchased outright by quarrymen. Until this time the quarries had always paid a levy to the manor on all the stone produced.

The Parish still has vast resources of excellent building, walling and paving stone, but the quarries on The Ridgeway and a quarry at St. Aldhelms Head are the only working quarries in the Parish today. 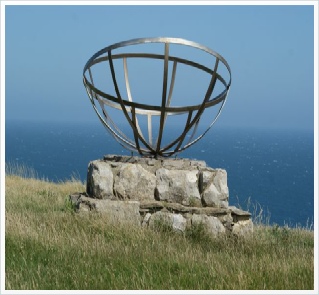 During the Second World War, Worth Matravers played a major part in the development of radar. Its invention and development of ground to ground radar has had a lasting effect on safe navigation. The only evidence of radar development that can be seen today is a plaque that marks the site.

Most of the route ways in the Parish depended on the export of stone, the sea to the east and the clay to the north. Until recently most of the roads we use today did not exist, except for the Ridgeway and parts of Haycrafts Lane. Most of the major route ways are now bridle paths, footpaths or no longer exist. The Priests Way was an important route to Swanage.

There was a route that linked Corfe to Renscombe to the lookout at St. Aldhelms Head. In medieval times a major route linked Quarr via Dunshay, Woodyhyde Farm, Afflington Manor to Scholes Gate and on across the common to West Street in Corfe. This was the major route for the marble and stone.

A route linked Worth Matravers with Rempstone (The Manor) via Haycrafts Lane (Downshay Manor). This changed when stone from Seacombe began to be transported overland (via Eastington) to Swanage.

The present A351 through Harmans Cross dates from 1926. There had been a previous route way close to the northern boundary of the Parish, but there is no longer any evidence of this. The route from Worth Matravers to Corfe Castle via Kingston probably came into existence because of vehicles transporting stone from Swanworth quarries. The Ridgeway Langton to Kingston was metalled in the early 1920s and the minor road followed later. 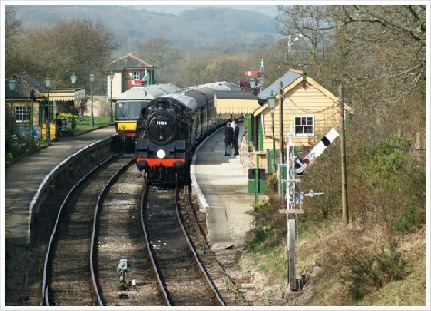 A rail link from Corfe Castle to Swanage was completed in 1885. However, its presence had little impact on the Parish until 1989 when the Swanage Railway Society placed a station at Harmans Cross. This amenity has had a very beneficial effect to Harmans Cross.

This is the first new station to be built in Dorset for over 50 years.